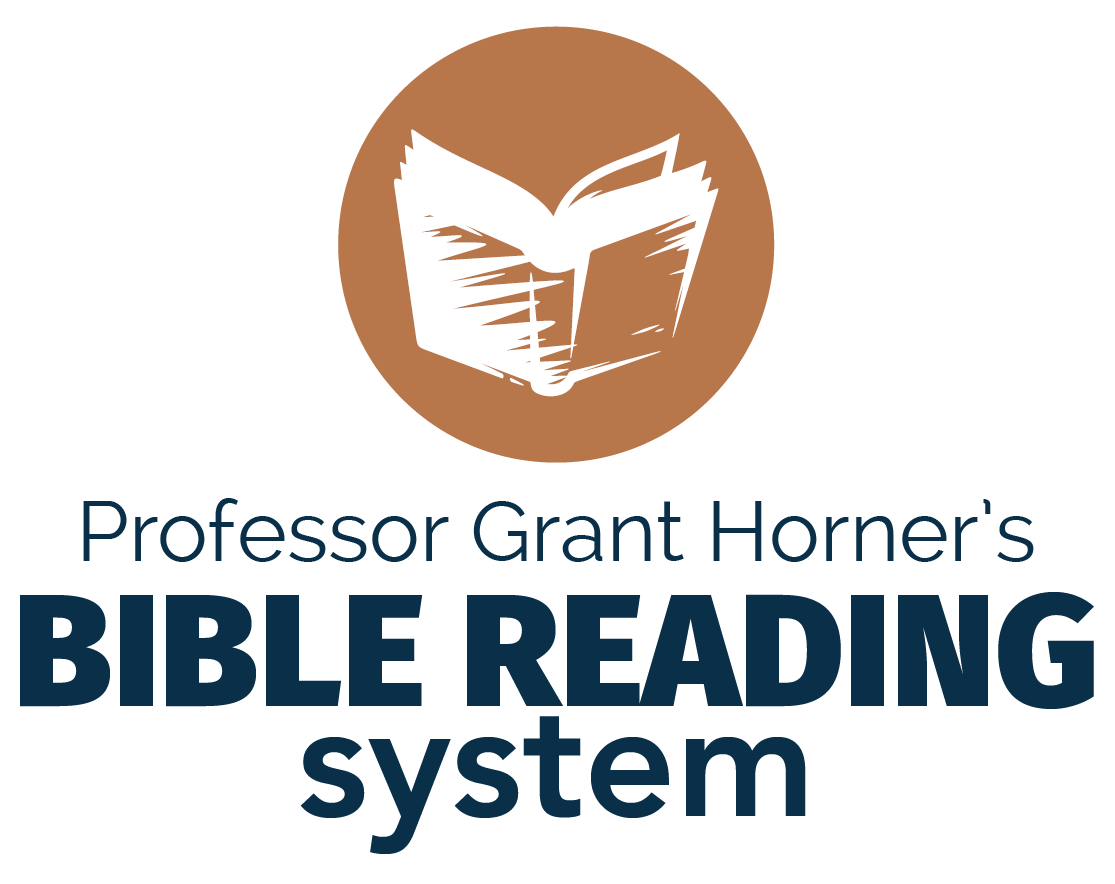 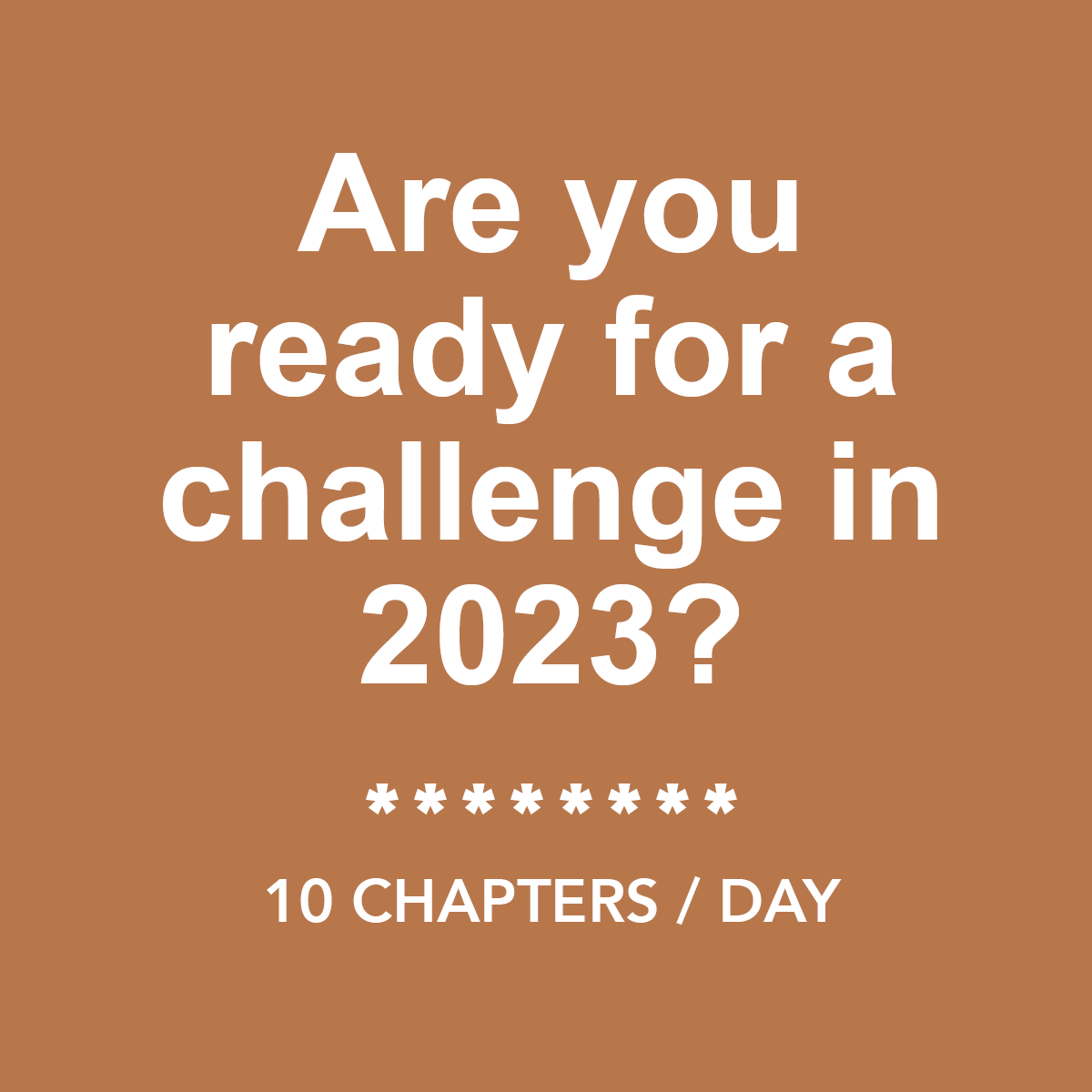 This year’s recommended reading plan was created by Professor Grant Horner of the The Master’s Seminary. It is designed to be an intense foray into every part of the Bible. Read a chapter in 10 different books of the Bible (45-60 minutes per day). See how Scripture explains Scripture in constantly changing patterns through the year. This system is unlike any Bible reading program you’ve tried before. Professor Horner challenges you to “Try this reading plan for ONE MONTH and find out yourself! You will never be the same.”

Review by Tim Challies
“From the outside it looks like this will be a massive amount of work, a huge commitment of time. But I have found that it is not. The purpose is not to spend a great deal of time in pondering each word, but in reading the Bible so much and so often that Scripture begins to explain Scripture… I commend this plan to you.”  Read Review…

An introduction by Professor Grant Horner

Many people ask me how it is that I know precisely where virtually everything is in my Bible. The answer: this system.

I began in 1983 (adapting and tweaking the basic design of another system) as a brand-new convert. Within 3 years I knew the text of my Bible very well. Twenty-five years later it is essentially imprinted on my mind and heart. I have been all over the country and have taught this system in many churches. I have done open-microphone Q&As on Bible and theology with 1200 people in the audience—as well as cultural-analysis live radio shows where you have to think fast—and it has been the “imprinting” value of this system that has helped me provide quick, clear, heavily contextualized scriptural answers.

I had no seminary degrees, no Bible college or Christian school education—hey, I never even went to Sunday School. All I did have was a chair, a lamp…and my Bible.

This is not merely a speed-reading program, nor is it a ‘study’ system. DO NOT be intimidated! I was a college dropout, ex-heavy-druggie when I started it. If I can do it—so can you!

I remember very clearly in 1983, when my soon-to-be father-in-law handed me his old but unused 1967 Scofield Study Bible as an off-the-cuff gift. I had never seen a good study Bible before, and was just starting to listen to MacArthur and Swindoll and Stanley on the radio. I was determined as a new believer to get to know the Bible. So I adapted the present system and have tweaked it many times since.

Its present form dates from the mid-1990s when I was in doctoral work at UNC-Chapel Hill and Duke and wanted to keep my head screwed on somewhat straight. That old Scofield was literally read to tatters by then—covers absolutely gone, spine vanished away, glue-backing visible and all curled up, stitching coming apart, the prefatory material destroyed all the way up to Genesis 1 and the concordance vanished past the entry for “sin.” But as a poor grad student, I had no money for a quality re-bind. Sometime later, I was flown out by Masters College for a 3-day interview/grilling process. The culmination was, of course, being ushered in to Dr. MacArthur’s private study, which is where he asked me his one question: “Can I see your Bible?”

I thought he would be horrified, because it looked like it had been through a typhoon. It looked unloved and neglected. Something from a dumpster. It was unbound, with stringy mess and paper debris hanging out. I was so embarrassed. I thought he would chastise me and recommend I get a new study Bible if I was serious about the Word.

However he flipped through it and handed it to his wife and said, “If your Bible is falling apart, you probably aren’t.” And I was basically hired on the spot.

I have done the system sometimes doubling up (2 sets per day, or 20 chapters), and other times by alternating days (5 chapters per day). The key is to get into a habit for a month.Then you’ll see you’ve probably been starving yourself.

The very best effect it has is rapid, broad-scale contextualizing across both testaments and all the different biblical genres. Did you know about all the similarities between Ecclesiastes and 2 Corinthians? How about the relationship between Deuteronomy and Matthew? It is like no other system that way, and it provides constant variety (which humans love) as well as consistent conviction (which humans hate).

Each day you will read one chapter from each of ten lists. That’s right—ten chapters per day!!! Use ten bookmarks or sticky notes with the individual lists on them to keep track of your locations.On day one, you read Matthew 1, Genesis 1, Romans 1, and so forth. On day 2, read Matthew 2, Genesis 2, etc. On day 29, you will have just finished Matthew, so go to Mark 1 on the Gospel list. You’ll also be almost to the end of 2 Corinthians and Proverbs, you’ll be reading Psalm 29 and Genesis 29, and so forth. When you reach the last chapter of the last book in a list, start over again. Rotate all the way through all the Scriptures constantly.

Since the lists vary in length, the readings begin interweaving in constantly changing ways. You will NEVER read the same set of ten chapters together again! Every year you’ll read through all the Gospels four times, the Pentateuch twice, Paul’s letters 4-5 times each, the OT wisdom literature six times, all the Psalms at least twice, all the Proverbs as well as Acts a dozen times, and all the way through the OT History and Prophetic books about 1 ½ times. Since the interweaving is constantly changing, you will experience the Bible commenting on itself in constantly changing ways—the Reformer’s principle of ‘scriptura interpretans scripturam’—‘scripture interpreting scripture’ IN ACTION!

After you’ve read any particular book once or twice, your speed in that book usually doubles or triples because you’re familiar with it and can move quickly and confidently. You are no longer merely decoding the text but thinking it through in the context of all of the scripture!

Even an ‘average’ reader, if focusing on moving through the text, rather than trying to figure everything out, can usually do this in about an hour a day (5-6 minutes per chapter). Many people report moving confidently through the ten chapters in 35-40 minutes. If it is taking you longer, then you are ‘reading wrong.’ Stay relaxed, focus, and just keep it moving. Moderate but consistent speed is the key. This is “gross anatomy”—looking at the whole body; you’re not closely studying organs or systems or tissues or cells—it is not microbiology. BUT microbiology and the study of organs makes more sense when you know what the whole structure of the human body is like, and how all the parts, large and small, relate in perfect interdependence.

After just a few days the reading gets much easier; in a month it will be a habit, and in six months you’ll wonder how you ever survived before on such a slim diet of the WORD. And then—you’ll tell others to start the system! I began in 1983 as a new Christian and have now read (most of) the Bible hundreds and hundreds of times. You also need to get ONE Bible, keep it, and do all your reading in it, so you learn where everything is. I’ve had the same Bible since 1983 and I know it intimately. If you keep switching Bibles, you ‘lose’ this intimacy with the text. Find a translation and format you like and stick with it. THIS IS CRUCIAL. Your Bible is the only thing on Earth that, as you wear it out, will actually work better and better.

Professor Horner’s academic specialty is the literature, theology, and philosophy of the Renaissance and Reformation, with primary concentration in Milton, Shakespeare, Erasmus, Luther, Calvin and late sixteenth and seventeenth century poetry and prose. He is an Associate Professor at the Master’s College north of Los Angeles, and is also Chair of Humanities at Trinity Classical Academy.

Join us for Sunday Worship Plan a Visit